Six months after securing a $23 million Series A round, Ketch, a startup providing online privacy regulation and data compliance, brought in an additional $20 million in A1 funding, this time led by Acrew Capital.

Returning with Acrew for the second round are CRV, super{set} (the startup studio founded by Ketch’s co-founders CEO Tom Chavez and CTO Vivek Vaidya), Ridge Ventures and Silicon Valley Bank. The new investment gives Ketch a total of $43 million raised since the company came out of stealth earlier this year.

In 2020, Ketch introduced its data control platform for programmatic privacy, governance and security. The platform automates data control and consent management so that consumers’ privacy preferences are honored and implemented.

Enterprises are looking for a way to meet consumer needs and accommodate their rights and consents. At the same time, companies want data to fuel their growth and gain the trust of consumers, Chavez told TechCrunch.

There is also a matter of security, with much effort going into ransomware and malware, but Chavez feels a big opportunity is to bring security to the data wherever it lies. Once the infrastructure is in place for data control it needs to be at the level of individual cells and rows, he said.

“If someone wants to be deleted, there is a challenge in finding your specific row of data,” he added. “That is an exercise in data control.”

Ketch’s customer base grew by more than 300% since its March Series A announcement, and the new funding will go toward expanding its sales and go-to-market teams, Chavez said. 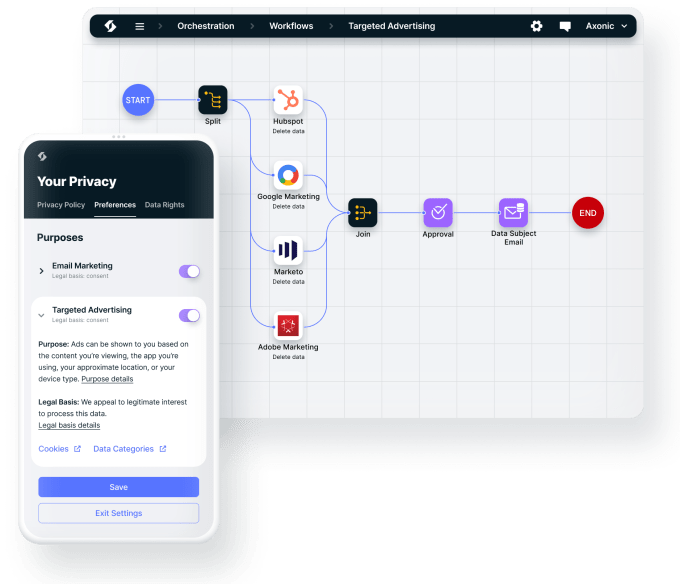 When looking for strategic partners, Chavez and Vaidya wanted to have people around the table who have a deep context on what they were doing and could provide advice as they built out their products. They found that in Acrew founding partner Theresia Gouw, whom Chavez referred to as “the OG of privacy and security.”

Gouw has been investing in security and privacy for over 20 years and says Ketch is flipping the data privacy and security model on its head by putting it in the hands of developers. When she saw more people working from home and more data breaches, she saw an opportunity to increase and double down on Acrew’s initial investment.

She explained that Ketch is differentiating itself from competitors by taking data privacy and security and tying it to the data itself to empower software developers. With the OTC tool, similar to putting locks and cameras on a home, developers can download the API and attach rules to all of a user’s data.

“The magic of Ketch is that you can take the security and governance rules and embed them with the software and the piece of data,” Gouw added.