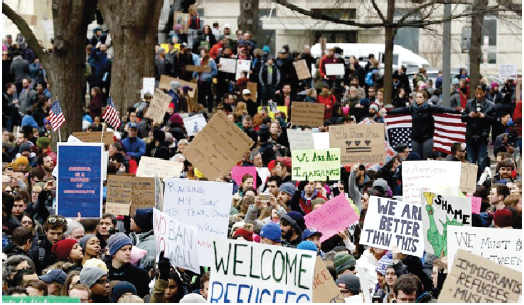 President Trump downplayed Monday the chaos at airports caused by the new extreme vetting program, saying in a series of Twitter posts that only a small number of travelers were delayed by the screening but other issues caused “big problems.”
“Only 109 people out of 325,000 were detained and held for questioning. Big problems at airports were caused by Delta computer outage … protesters and the tears of Senator Schumer,” said Mr. Trump, referring to Senate Minority Leader Charles E. S c h u m r w h o e n c o u r a g e d protests.
The president continued the tweets, saying that Homeland Security secretary John Kelly “said that all is going well with very few problems. MAKE AMERICA SAFE AGAIN!” The weekend news coverage was dominated by protests, court rulings against the new travel restrictions for seven Middle East countries and back-and-forth in the administration over whether Green Card holders from those countries were except from the ban. Mr. Trump tweeted: “There is nothing nice about searching for terrorists before they can enter our country. This was a big part of my campaign. Study the world!”

Buddha Purnima: Buddhist monks from across world call for peace