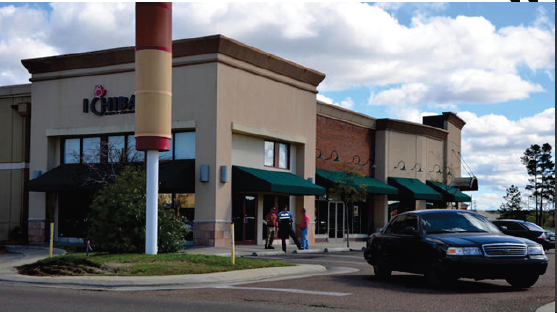 U.S. Immigration and Customs Enforcement agents detained 55 people Wednesday on what were described as immigration-related charges as they executed criminal search warrants at a string of Asian restaurants in central Mississippi.

As the news rippled across close-knit immigrant communities, activists said that owners of restaurants and stores hurriedly closed their doors and workers left construction sites. The paranoia and sense of fear is overwhelming,” said Ramiro Orozco, an immigration attorney based in Jackson. “All the raids and the rhetoric c o m i n g f r o m t h e n e w administration have created so much anxiety.

We’re getting to the point that people are pulling their children out of school, they’re not going to work.” Law enforcement officers stand outside Ichiban Sushi & Chinese Buffet in Flowood, Miss. More than 55 people were detained in immigration raids at Asian restaurants in Mississippi on Wednesday. The first call came Wednesday morning: Federal agents were raiding a Chinese buffet in the city of Pearl.

Before long, word spread across Mississippi immigrant communities that agents were targeting a Hibachi grill in nearby Flowood and a sushi restaurant nearly 100 miles away in Meridian. “We told people we don’t know what’s going on,” said Bill Chandler, executive director of the Mississippi Immigrants’ Rights Alliance in Jackson. “The best thing to do is to go home.”

SC ticks off corporate lawyers on pleas for urgent listing