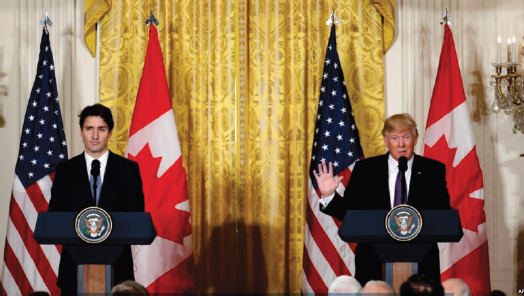 “The last thing Canadians expect is for me to come down and lecture another country on how they choose to govern,” he said at the White House. Both leaders stressed the countries’ shared economic goals and cooperation at a joint news conference.

But their responses to questions about Syrian refugees underscored their c o n t r a s t i n g p o l i c i e s o n immigration. Mr Trump defended his controversial travel ban, saying he wanted “to have a big beautiful, open door”, but that “we cannot let the wrong people in”.

A federal judge has issued a temporary nationwide block on the travel ban, but the issue of refugees appeared to overshadow the joint news conference.